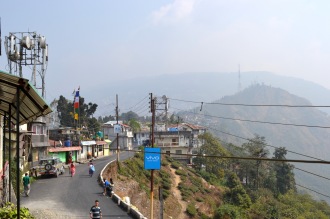 We arrived at Badogra airport care of Air India with my head full of images of Turbans, Bengali Tigers and Bears! These were the images presented to English children about exotic Bengal when I was at school and those images had stuck. I saw very few Turbans as the majority of the population are of Nepalese decent, and the only tigers and bears were some very sad creatures in a Zoo. However it was exciting to be in the lower Himalayas and more importantly, on a date to see my brother, for the first time since my last visit the UK several years ago.

The road from Badogra to Kurseong is steep, it almost covers as much distance vertically as it does horizontally, hairpin bend after hairpin bend getting steeper and steeper, wheels spinning and horn blazing. We dodged old overloaded trucks and rows of immaculately dressed school children, eventually we made it to our first stop in the high country at an altitude of 1,500 metres.

The temperature has dropped about 10*c from the plains at Siliguri to the foothills of Kurseong. We went from light clothes and AC to thick clothes and heaters, it’s easy to understand why the British chose to retreat to the mountains during the oppressive summers in Delhi and Calcutta. We were in fact on a narrow strip of land between Nepal and Bangladesh. This is strategic as it gives India access to not only Darjeeling, but also Sikkim, which abuts Tibet, a country China claims as its own. Tourists require an entry permit to go into Sikkim, and additional ones to go anywhere approaching the borders. India is compassionate with refugees from both Tibet and Nepal. Whilst the Himalayas are very inhospitable, with high altitudes and icy cold climate, they are politically very strategic.

I had hoped to catch up with my brother in Kurseong, but after a trek on the Tibetan border they returned to Darjeeling, not Gangtok, as expected. Cochran’s Place hotel manager remembered them staying, but we had missed him by several days. Cochran’s Place is an old colonial home perched high on a ridge, with views to both sides of deep valleys and of course tea plantations. This is as far removed from Delhi as one could get.

We walked the 3 km into the town centre and were treated to a glimpse of the World Heritage Listed Darjeeling Himalayan Railway (DHR), or Toy Train, as it is affectionately known. It’s a narrow 2-foot gauge line with active diesel and steam locomotives that run along the main south-north Hill Cart Road; but more on the Toy Train later.

We stayed at Cochran’s Place 2 nights, and started to understand the majesty of the very steep terrain, and quickly learned to respect the effort needed to go what looked like short distances on a map. West Bengal is a centre for tourism and tea. In the lower reaches the tree plantations were green and ready for picking, whilst in the higher altitudes they had been cropped and pruned, the plants were in a dormant state and just looked like a bunch of dead sticks poking out of the ground. Most of the tourists were in fact Indians, many of who had not expected the change in temperature from Delhi and Kolkata. Normall

y well-dressed people were coming to breakfast in all the cloths they had brought with them including tracksuits under saris and hoodies over business shirts, the cold was not something they were accustomed with.

I called ahead to the Hidden Forest Resort in Sikkim and discovered my brother’s group would be there as planned. We booked a car for the next day and ate at the Hotel, the people of the hills are very friendly and staff at Cochran’s Place were no exception. The journey to Gangtok was a very long car ride on steep and slow roads. The less than 100km trip took over 4 hours and cost a small fortune by Indian standards. At the border to Sikkim we completed the paperwork and had stamps put in our passports. Instantly things took a slight shift, buildings were being finished and generally more care was tendered on the public domain, street rubbish was significantly reduced. I like the place already.

Lonely Planet reported the food in Sikkim is good, as long as you like Momos, which are steamed pastry pockets filled with either chicken or vegetables. The driver stopped for a break in a hill village where we had hot tea and the best Momos with chilli sauce. Contrary to the Lonely Planet report once in Gangtok I had to look hard to find them again, with a wide choice of Indian, Nepalese, Chinese and western food dominating Menus.